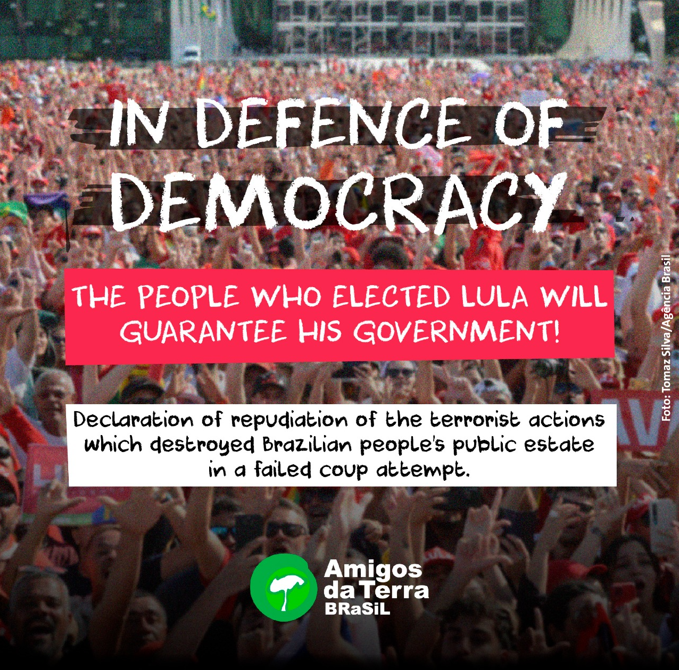 Friends of the Earth Brazil, a social organisation acting for Environmental Justice in this country for more than 50 years, in this vile moment of Brazil’s history comes to publicly repudiate the attempted coup by supporters of Bolsonaro, which caused destruction in the National Congress, the Supreme Federal Court and Palácio do Planalto (seat of the central administration of the federal government). Such acts are anti-democratic and constitute terrorist practices. The violent intentions of those groups were clearly exposed to the Brazilian society.

With gloom and indignation, we watched the acts of violence and vandalism which took place with the connivance of the public security and insubordinate inaction of the Armed Forces in the Three Powers Plaza. The same place where some days ago, on January 1st, 2023, with more than 40 thousand people in front of the palace’s ramp, and more than 300 thousand in the area of the monumental axis in Brasilia, we experienced the biggest popular and democratic party of all times: the inauguration of president Luiz Inácio Lula da Silva, who received the presidential sash from the hands of representatives of the Brazilian people.

In the face of barbarism, the Military Police of the Federal District did not act. Besides negligent, they were connivant. Also condemnable is the attitude of the governor of the Federal District, Ibaneis Rocha, now ousted from his position. Only after some political pressure did he exonerate the chief of public security, ex-minister of justice in the Bolsonaro administration. Therefore, it is necessary to investigate and punish the people responsible for governability, for public security and for not having performed their duties and demonstrated commitment to the Rule of Law, nor having guarded, as responsible authorities, the civilising and democratic landmarks of a nation.

All the people involved, from the ones who were present in the violent demonstrations to the ones who financed the mobilisations, must be mercilessly investigated and punished for the destruction, but above all for the attack on democracy. There must not be any type of amnesty to this fascist and coup-inciting barbarism! We must change history and hold accountable those who have used violence against the elections and the democratic institutions. May episodes like this, of fascist attempt, never exist in Brazil, Latin America and the whole world! Enough with the coup attempts against democratically elected governments!

As diverse Brazilian people who integrate a social organisation committed to environmental, social, economic and gender justice, and to the fight against the oppressions of class, race or heteronormative ones, we need to show solidarity in this situation of attack on the Brazilian people. We hope this episode can be a lesson for the construction of ways to overcome so many wounds, violence and historical debts which the country has to face regarding women, original peoples, quilombolas and black people in order to become a humanely dignified and democratic society.

We, along with the popular movements in the Brazilian democratic arena, summon all people who defend democracy, peace, love and respect; all the peoples in this country in their great richness and diversity, to be in the streets today (January, 9th). We also count on the internationalist solidarity of social movements around the world which act in defence of democracy, against fascism and in the construction of just and sustainable societies, interdependent and eco dependent, free from all forms of oppression, in which the human rights of the peoples are respected and granted. The sustainability of life must be at the centre of their actions and their social and political constructions.  Every public demonstration is now necessary in support of those shared values and against the attacks on democracy and the peoples of Brazil! 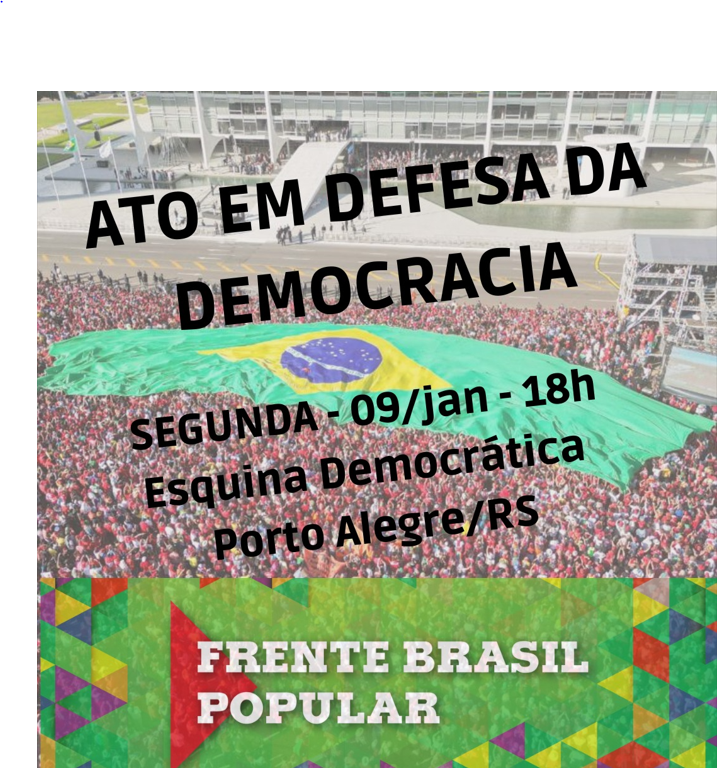