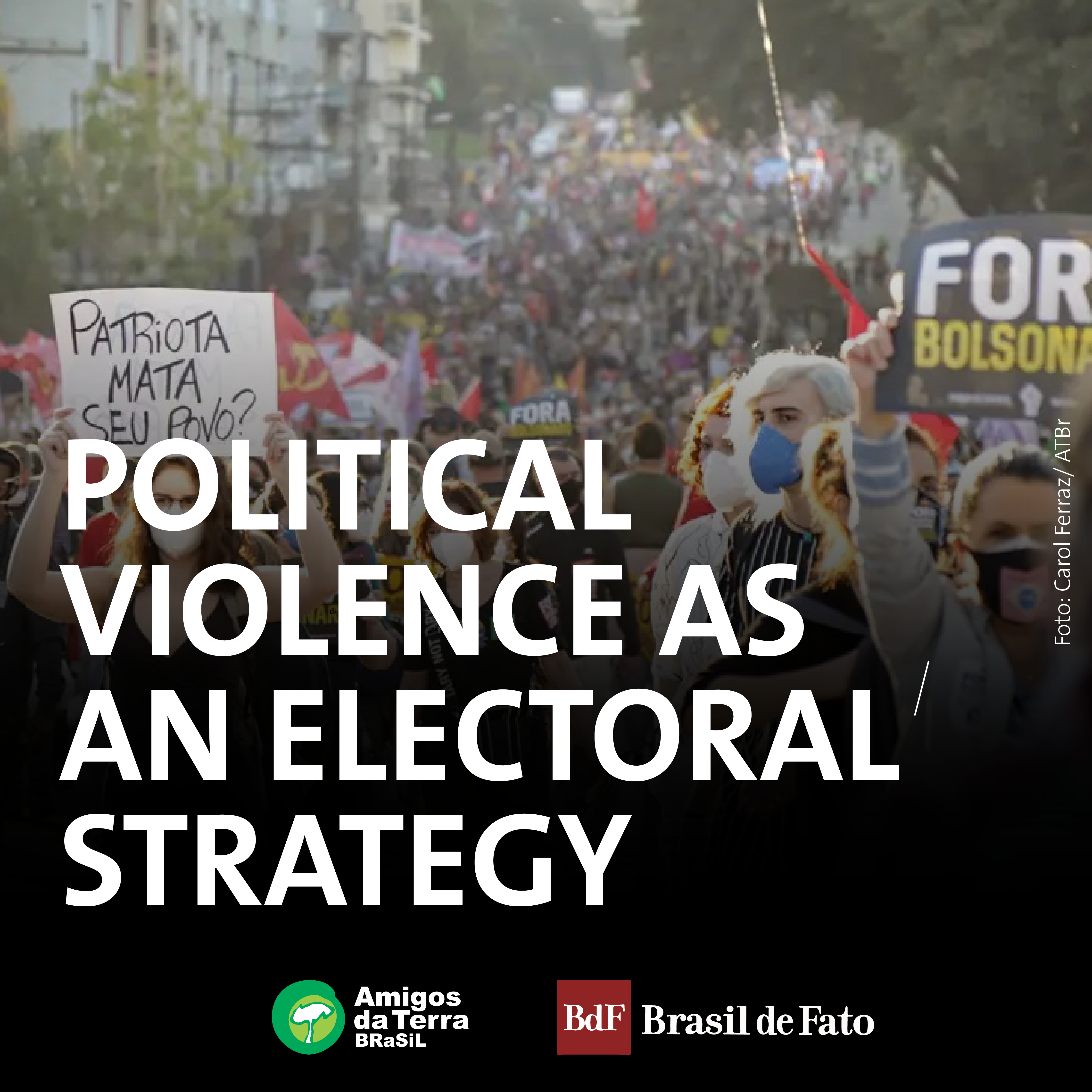 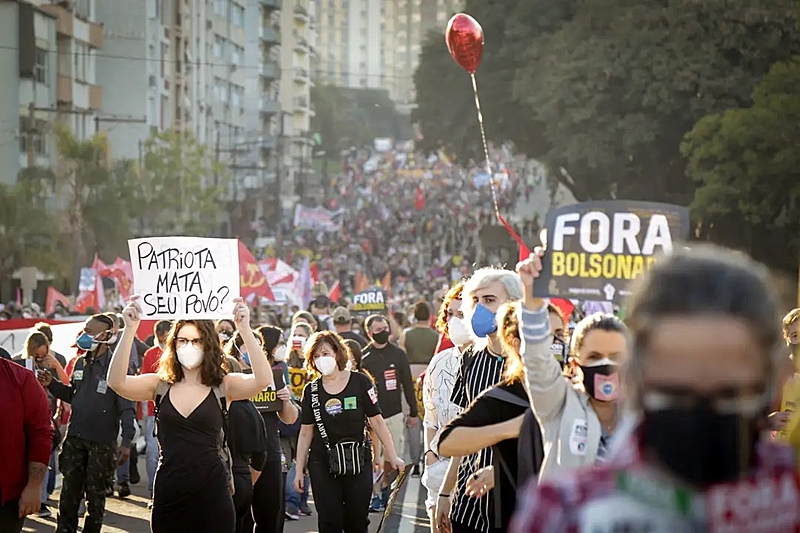 Carelessness of the federal government and violence stimulated by its members’ speeches are constantly denounced in protests all over the country. Credit: Carol Ferraz/ ATBr

The advance of fascist governments, connected with the new neoliberal offensive in Latin America, has its roots in the growing political violence. This geopolitical corner has witnessed its use as a strategy to control the consciences of the masses. Since the 2016 coup in Brazil, the escalating hatred has been useful for authoritarian governments to implement antidemocratic policies founded on narratives of attack to the country’s political institutions. While the people get lost in the opium of the supposed fight against corruption, neoliberalism advances brutally over their rights.

We have seen the impeachment of former president Dilma drowning us into a sea of political violence. It is impossible not to remember the brutality of the speeches in the National Congress as of the voting of the forfeiture, among which that of the present president saluting the men who tortured Dilma during the dictatorship. Or even the sad murder of councillor Marielle Franco and of Anderson Gomes on 14 March 2018. Political violence as a weapon of candidates was widely used in the 2018 elections – it suffices to remember all the misogyny suffered by candidate to vice-presidency Manuela D’Ávila – and is present in this year’s elections as well. The murder of capoeira master Moa do Katende in that same year in Bahia, like others, was motivated by an elitist, misogynous, racist and colonial discourse against progressive political leaders, defenders of human rights and the rights of the peoples. Those violent actions take place through verbal and symbolic means, attacks on social networks, defamation of image, distortion of facts and even threats and attacks to people’s lives.

The power of political violence as a weapon of (mis)education of masses is cruel. It is structured as hate speech connected with negationism (of history, science, facts, knowledge, etc), which strengthens extremist and antidemocratic groups, while completely ignoring civilising pacts like civil and political rights. The use of that violence as a political tactic in the region is quite emblematic. The 2019 coup in Bolivia still echoes in our memories: extremist groups did not accept the outcome of the elections and, through brute force, took over the State. An iconic image of intolerance is when the mayor of Vinto, Patrícia Arce Guzman, was dragged along the streets by a mob, her hair cut, painted pink, forced to walk barefoot for many blocks.

It is hard when those facts become so common that we naturalise their violence. In the last weeks only, there was the attack suffered by the brother of the president of Chile, Gabriel Boric, in a tense context of voting for the approval of the new constitution. Also, the gun pointed at Argentina’s former president Cristina Kirchner. It happens on a daily basis in Brazilian politics, in all presidential speeches of Jair Bolsonaro, especially the one last 7 September, in which hate speech was delivered towards other candidates, the democratic institutions and popular movements. In July this year, Marcelo Aloizio Arruda, one of the leaders of PT, was killed by gunshot in his birthday party by federal policeman Jorge José da Rocha Guaranho, who invaded the event in Foz do Iguaçu, state of Paraná, shouting “Here we’re Bolsonaro!”. Such a phenomenon, along with so many other tragic examples, have lowered the level of the electoral debate, bringing about the apathy of the masses towards central issues in politics such as the fight against hunger and unemployment, and the elaboration of governmental programmes and social policies. That brings forward to the public arena conservative values like religious and sexual intolerance, spreading of white male dominance, gun culture and militarism.

Data on the rise of violence

A study of the organisation Land of Rights, carried out between 2016-2020, registered 327 cases of political violence, most of which murders and attacks, with the states of RJ, MG, CE, MA and PA being the leaders in occurrences. Researches point out that those cases are concentrated in the countryside, and more directed towards councillors. That happens because in those places, relationships of complicity are developed between violence, the control of the local political institutions and the media, in a complex network organised to guarantee the interests of the local elites, as informed in the Political Violence Guide, elaborated by the Brazilian Committee of Human Rights Defenders.

In that scenario, two important normative marks were approved in 2021: law nº 14.197/2021, which promoted changes in the Criminal Code, considering as crimes the attack to democratic institutions and the operationality of the electoral process, with penalties which may vary from 3 to 12 years in prison. The other mark was Law 14.192, also from 2021, which establishes norms for combating political violence against women, promoting changes in the Electoral Code and the laws of political parties and elections. We know that over women’s bodies weighs the burden of patriarchy, so that type of violence is articulated with sex and gender violence, imposing other forms of expression and practice on the women who are leaders in politics and in the defence of the land, communities, common goods and nature, such as inciting “collective rape”, domestic violence and spanking the children.

Although the legislation recognises those problems, its applicability is very weak. There are few cases of investigation and accountability for those crimes. One should only observe that throughout this year, many protesters, MPs and the very president of the Republic have stated unfounded claims about the electoral system, with attacks to the Superior Electoral Court (TSE) and the Supreme Federal Court (STF), which would imply their ineligibility. However, they remain unpunished. Certainty of impunity is so high that on 7 September in Rio de Janeiro, the first lady felt comfortable enough to say out loud: “Bolsonaro was clear in his message to the STF”.

Agents from the high spheres of power in Brazil use their social networks, the State’s communication structures and WhatsApp lists to spread misinformation and hate. The distorted facts, once spread, cause damage and convince a great number of followers. It works like a cult interconnected by hate speech towards common political figures, institutions and democratic procedures. Such sacralisation of politics is so symbolic that it establishes a connection between violence and religious symbols. One example of that is neo-Pentecostal sectors associating candidates to demons. The fragility of the critical sense of the masses gives roots to those processes, making it even more challenging to raise awareness about the reconstruction of democracy.

The political construction we want

Several organisations of human rights have been building mechanisms to fight political violence. In December 2021, the National Human Rights Council (CNDH) led the composition of the Memorandum of Understanding for Democracy, produced by the Office of the National Ombudsman (PFDC), Public Defender Office (DPU) and the Commission of Human Rights and Minorities of the Chamber of Deputies, aiming to establish a cooperation between those entities to promote the defence of democracy in Brazil by strengthening the norms, institutions and procedures. Likewise, TSE has been releasing informative campaigns about the electoral process, the security of auditable vote and the creation of channels for denouncing political violence.

That soil of violence is not fertile enough to sprout a political project which can deal with the necessities of the Brazilian people’s concrete lives. The flag of violence is always waved by capitalism to overcome its crises, be them the wars in the Middle East or dictatorships, fascism and the coups d’état in our region.  Against that project we raise the flag of hope, in a collective construction towards a fairer and more egalitarian society, in which our people may have bread, land, roof, work and environmental justice; and we may have peace in our hearts and a book in our hands.

* This article was originally published in Portuguese on the website of the Brasil de Fato newspaper in https://www.brasildefato.com.br/2022/09/13/a-violencia-politica-como-uma-estrategia-eleitoral