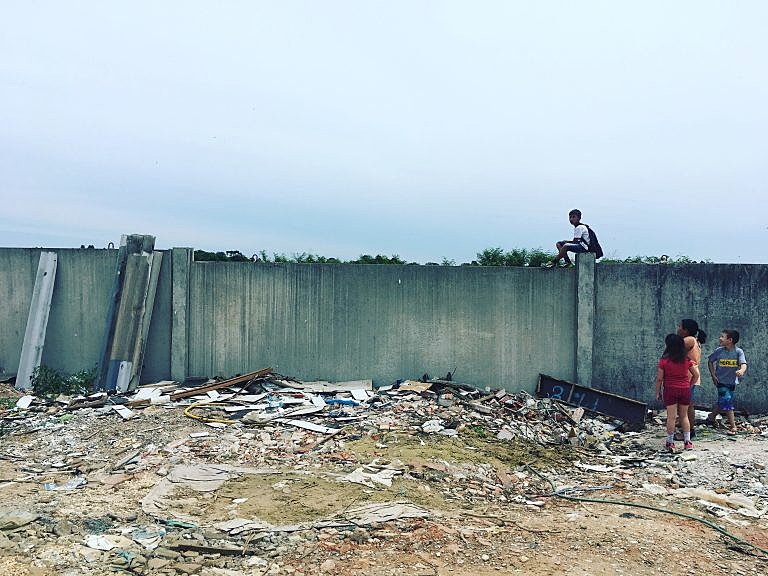 As Brazilians, we are used to having to question the narratives of development. On or next to our territories, a series of unfulfilled promises are imposed, reproducing the sad reality of social marginalization. Land occupied by people that depend upon it to live, work and reproduce is considered uninhabited, relegating entire communities to invisibility.

This criticism reflects what has happened to the Vila Nazaré community, in the northern zone of Porto Alegre in the state of Rio Grande do Sul. Initially expelled due to the encroachment by agribusiness in the countryside during the 1960’s, the families that occupied the Vila form part of the rural exodus phenomenon to the outskirts of the state’s capital. An uninhabited area, without any public services, upon which dozens of workers started organizing their lives, weaving their social and cultural fabric throughout the territory. Through the strength of popular organizing, together they conquered access to water, electricity, health center, schools.

One day however, supposed development arrived. In March of 2017, city hall started to expand its interest in the northern Porto Alegre. A swamp area that is being filled in for the advancement of the “production sector”, which also includes the Salgado Filho Airport’s expansion, and not the people.

Around this time, the airport concession was granted to the German company, Fraport. Maybe the word concession presents a consensus imagery; however in reality, it has actually established the brutal privatization of a public service for 25 years. What does this mean for people’s daily lives – an increase in costs for the services provided, the establishment of additional tariffs, or the gates that are currently being raised. The logic of profit maximization prevails over the public interest.

For this project, Fraport invested R$ 382 million, aimed at attending planes with a capacity for heavier loads. The government narrative was to establish the promotion of regional development while facilitating widening transport logistics, which included the airport’s expansion. There was complete disregard by state authorities with respect to the destiny of the 2 thousand families that lived there. The only state agency to manifest concern regarding responsibility resulting from the impacts, relocation and eviction was FEPAM (the State Environmental Protection Foundation). It is important to also note that, in the signed concession contract, Fraport agreed to its responsibility for the costs of relocating the community,  as is affirmed in the lawsuit filed by the federal and state prosecutors and public defenders against Fraport.

Submerged in a scenery of uncertainties and with Fraport’s utter refusal to dialog with the community, the families started experiencing a violent process of expulsion. All the evils of megaproject infrastructure are reproduced in this region: total denial of collective negotiation by prioritizing the individualization of conflict; criminalization of leaders and promotion of a negative image of the community, lack of access to information and non-payment of indemnity.

Disregarding Fraport’s contractual obligations, the municipality assigned to the families new public housing complexes, namely Nosso Senhor do Bom Fim and  Irmãos  Maristas, faraway from the region of the Vila. The option was offered in a precarious manner at the end of the eviction process, after the families had resisted lack of water, garbage collection, public lighting and had had their schools and health center razed. What’s more – during the eviction, Fraport did not even recognize the legally established residents’ Association and sub-contracted the engineering company ITAZI, infamous for evictions, to carry out the process, outsourcing its responsibilities, consequently highlighting its negligence. The administration of the illegal evictions counts with the complicity of the State through the Brigada Militar (name given to the military police in Rio Grande do Sul).

Various errors have been pointed out in relation to the municipality’s position: the failure to utilize available areas near the Vila, namely to diminish the impact of the lost territory; the fact that the public housing complexes were constructed with resources from the Federal program “My House, My Life”, which should have been designated to the city’s existing housing deficit and not to act like a compensatory policy at the behest of a foreign corporation. Furthermore, the complexes lack the array of public services like schools, hospitals and public transport, and present construction defects.

As is true not only of capitalism, history repeats itself tragically, the families of Vila Nazaré were evicted to give space to the runway expansion.  Each person that left the Vila had their house destroyed, a sign to those remaining that this territory had a new owner. The owner listed on the deed, without actual occupancy, was duly indemnified; where as the majority of the community, with an occupancy of more than 50 years, was forced to relocate. And as part of the sad saga of the displaced, MTST (Houseless Workers Movement) has made efforts to bring together those evicted in the Porto Alegre’s northern region, in the Ocupacao Povo Sem Medo (People without Fear Okupation), demonstrating the availability of other territories in the region, and creating a space of resistance against the eviction.

From “aeroporto” to “airport”

The privatization of public service removes the orientation of its social and collective destination, loosing even more its character through relief and tax exemptions. Once there is no social or financial return to the collective, there is the loss of control and common administration. Meanwhile the logic of profit prevails, everything becomes an object of merchandising. Therefore, after the privatization, the Salgado Filho Airport started to be called ‘Porto Alegre Airport”, being managed by a transnational company that has no commitment to the local reality.

Data found by City Councilor Mateus Gomes’ mandate (PSOL) have demonstrated that Fraport has been granted R$ 71 million in 2022 through an exemption of property taxes and amnesty of fines and fees. Meanwhile, the families relocated to the housing complexes are barely surviving with a complete lack of services. If we consider the company’s compensation of R$ 4 million for the construction of an elementary school in the Irmãos Maristas complex,  tax concessions and amnesties are actually financing the corporation’s contribution.

It is important to highlight that air transport contributes to the increase of carbon dioxide in the atmosphere and is one of the most climate damaging forms of transportation, not constituting an ecological axis of logistics. It represents the best practicability for corporations to integrate their production chains. However, environmental alternatives have shown the importance of questioning long distance logistics and instead have promoted local commerce and consumption with the objective of reducing greenhouse effect gas emissions, resulting in an effective contribution to the reduction of climate change.

Contrastingly, Fraport looks to promote itself with a green image, announcing that it will have a “zero carbon footprint” by 2045, something very hard to believe considering that its business is based on plane traffic. This may a possibility for the German company because it uses the carbon offset and reduction scheme (Carbon Offsetting and Reduction Scheme-CORSIA), where it holds on to forest lands to compensate and neutralize the emissions. In reality, extending its damage to other areas, committing various violations: namely that of the Vila Nazaré community through its mandatory removal, the population of Porto Alegre through the appropriation of its public service and for the people of Acre and other parts that suffer from these carbon sequester schemes.

The global network Stay Grounded (SG) has denounced the impacts of the aviation industry around the world. As well as advocating against climate injustice, SG has decried the fact that access to aviation is concentrated in the rich minority. According to data, the majority of people in Latin America and the Caribbean have never stepped foot on an airplane, like the residents of Vila Nazaré. In its map of injustices – EJAtlas – Global Atlas of Environmental Justice, it is shown how the construction of airports and infrastructure does not promote local development.  On the contrary, they expel the people from their territories, they destroy livelihoods, loot water and fertile land and devastate ecosystems.

In the wake of a critical proposition from a global network, the case of Vila Nazaré had repercussions in Germany, with the help of Bund – Friends of Earth Germany and KOBRA (Brasil-Germany cooperation), which brought German media to see with their own eyes and ears the reprehensible actions of Fraport on Brazilian land. This initiative was articulated in conjunction with the process of denouncement before Fraport shareholders, an initiative started by an investigation on human rights violations carried out by German companies during the Brazilian dictatorship.

The work to continue denouncing the brutality with which the German company conducted itself during the eviction of families in Vila Nazaré, in which they failed to assume any responsibilities, not even with the proper due diligence that it purports to follow.  On the contrary, benefiting from the structure of the architecture of impunity, which highlights the slowness of the judicial process where the right of the families were being defended, Fraport consolidated the removal of the majority of the community, outsourcing the problem to other regions of the city, faraway from the airport.

The expansion of the aviation enterprise is closely connected to land disputes, exemplified in the case of Vila Nazaré. With the violent silence of the authorities and the corporate lobby, airport runways and immense industrial complexes expel the poor populations always further away from the cities and their centres. To stop the expropriation, pollution, destruction, private appropriation of public services and the ecocide caused by the aviation industry and connected activities, the rights of the people should be fully recognized, guaranteed and respected, especially for local communities and farmers with regard to governance and possession of land and territories. This will also help to guarantee food sovereignty and protect the means of livelihood, work, culture and traditions of the Peoples.

The sentiment of social-environmental injustice that hovers over the case casts light upon the urgency to reflect upon a proposed change to the Brazilian impunity paradigm protecting companies in Brazil. As proposed by the recently presented bill PL 572/2022,  and when managing the conflict, the suffering of the victims should be prioritized while also ensuring their right to participate in the debate regarding the project, reassuring their full right to total reparation. Likewise, the judicial power should act to preserve their rights, preventing them exposure to marginalization and equalizing the asymmetric powers between Fraport and the community.

We also want to clamor around the alert regarding the advancement of the privatization of public services. Various ongoing bills, approved privatizations, where the companies have been granted the sewerage and water distribution services, the control of gas and petroleum, all of which can implicate an increase in fees for people’s lives. The risks are not only limited to national regulatory frameworks but also to the advancement of European Union and Mercosul Agreement, which will further open the possibilities of privatization of essential public services, as a countermeasure.

The saga of the excluded in a capitalist society has always been to be pushed to the border, to the point that the only place left is a “non-place”.  In this world of inequalities, we are an ocean of those who do not exist for the State, that are situated on the extremity of any rights project. We serve to carry on our backs the weight of all the damage.  Its sad, but we are still exiled from our own lands.

Friends of Earth Brasil (ATBr) is an organization that acts to construct the fight for environmental justice. Fortnightly, we publish articles about economic and climate justice, food sovereignty, biodiversity, international solidarity and against the oppression.

*Article originally published in the Brasil de Fato newspaper at this link: https://www.brasildefato.com.br/2022/05/23/desenvolvimento-para-quem-transnacional-fraport-expulsa-familias-em-porto-alegre