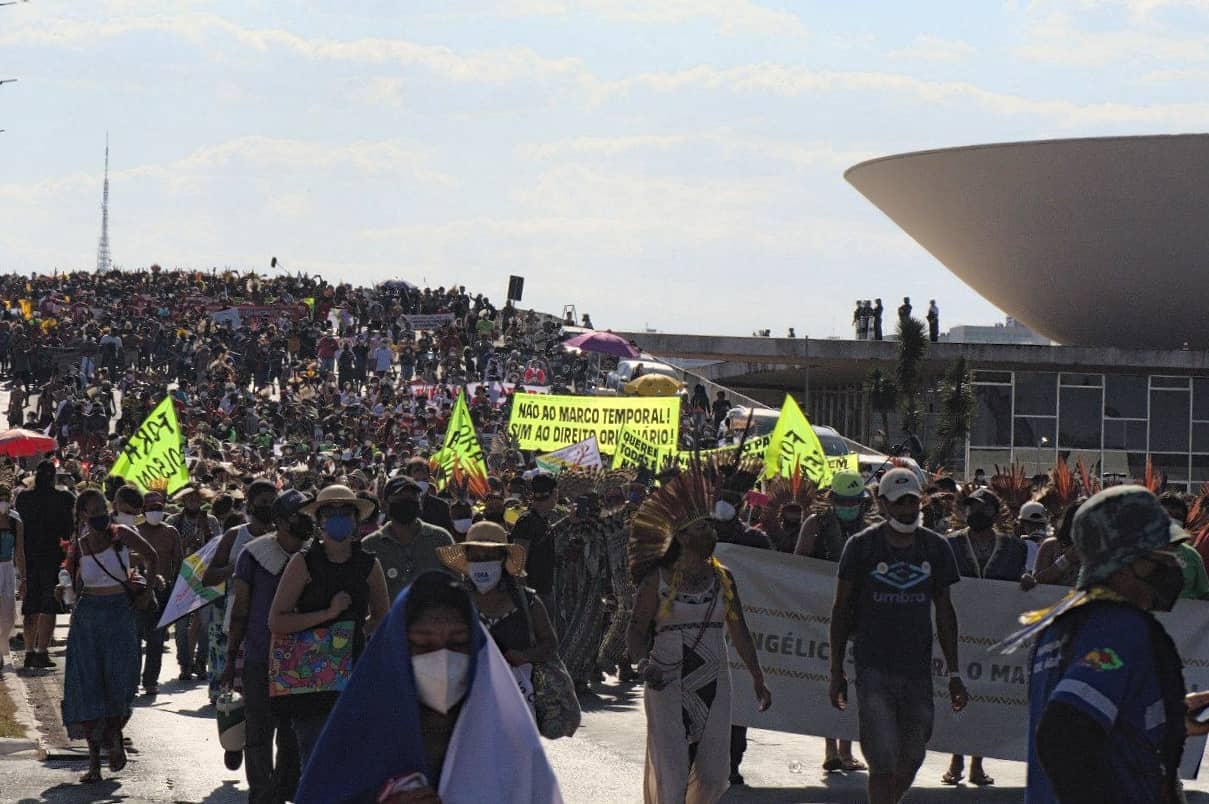 Against the rights of the original peoples from these lands which we now call Brazil, agribusiness acts solely and exclusively out of greed for profit. Moved by money, the ruralist bench keeps pressuring to turn the country into a great farm exporting soy and cattle.

Last week MP Neri Geller (PP-MT), vice-president of the Agribusiness Parliamentary Front (FPA) made it clear that the ruralist bench had been working to postpone the voting session of Marco Temporal by the Federal Supreme Court (STF), as it indeed happened last Thursday (26th), which was postponed to this Wednesday (1st).

In a video, Geller speaks about an agenda to tackle the issue before voting with the president of STF, Luiz Fux, but the official agenda of the minister does not indicate that possible meeting. “We, the direction board of FPA, request a schedule to try to speak with Fux soon, until 4 p.m., before this issue goes to the general session”, said he.

It is nothing but a manoeuvre to buy time and get the president of the House, agribusinessman Arthur Lira (PP-AL) to insert PL 490/07 into the house’s agenda. The PL (law project) modifies the constitution, making the proposal of Marco Temporal legal. According to that unconstitutional legal nonsense, indigenous people would only have the right to demarcation of the lands which were in their possessions on October 5th, 1988, date of validation of the Constitution, against the indigenous thesis in force today in which the indigenous rights are original, therefore previous to the European invasion and the very creation of the State. PL 490 was approved on June 23rd by the Constitution, Justice and Citizenship Committee (CCJ) of the House, on a day marked by strong repression to indigenous people who manifested against the voting in Brasilia.

STF cannot give in to the pressure of agribusiness, and it must point out and recognise immediately that the marco temporal is unconstitutional, as various jurists have been stating. Undefinition on the subject increases the tension and the attacks against indigenous people all over the country.

The voting of #NotoMarcoTemporal by STF has been the main agenda of the country in the last weeks. It is a historical moment, even if the covers of the big newspapers make it seem otherwise. That is because the voting of Marco Temporal on the Indigenous Land (TI) Ibirama-Laklãnõ, where the Xokleng, Guarani and Kaingang people live in Santa Catarina, represents a decision of “general repercussion”, i.e., whatever is decided will bring consequences to all the indigenous peoples of Brazil in demarcation suits in all legal instances. More than 6 thousand indigenous persons from 176 peoples were in Brasilia last week waiting for the voting of the ruralist farse. Postponing that voting has a demobilising character, but not to the ones who have been fighting for their right to live on those lands with their lifestyles for more than 521 years. One third of the Struggle for Life Camping is still in Brasília waiting for the judgement and the beginning of the March of Indigenous Women next week.

While #OutBolsonaro‘s ruralist bench tries to demobilise the indigenous fight, the data prove: who preserves our biomes, biodiversity and life are the original peoples. That is what indicates a survey made by MapBiomas based on satellite images and artificial intelligence. The study shows that between 1985 and 2000, the best-preserved areas in Brazil were the indigenous lands – both the demarcated ones and the ones still waiting for demarcation, with forest loss of 1.6% in a period of 35 years.

Bolsonaro himself had the nerve to say that the rejection to the farse of the marco temporal would generate lack of food in Brazil because it would affect agribusiness! Opposite to Bolsonaro’s unsustainable argument, agribusiness does not stop growing and making profit under his administration, even breaking records, and that happens when more than 19 million people in our country are hungry again! Measures which favour agribusiness exclusively like marco temporal are the ones who cause poverty in the country, not the respect to the rights of the original peoples!

Therefore, we must continue denouncing the corrupted game which does not respect the institutions or the Constitution itself, which runs over the norms and acts with the worst lobbyist antidemocratic logic. STF cannot bow to the manoeuvres which aim profit above life and the common goods and let the Congress approve PL 490 and only later declare that the marco temporal is unconstitutional. The manoeuvre needs to be eliminated now!