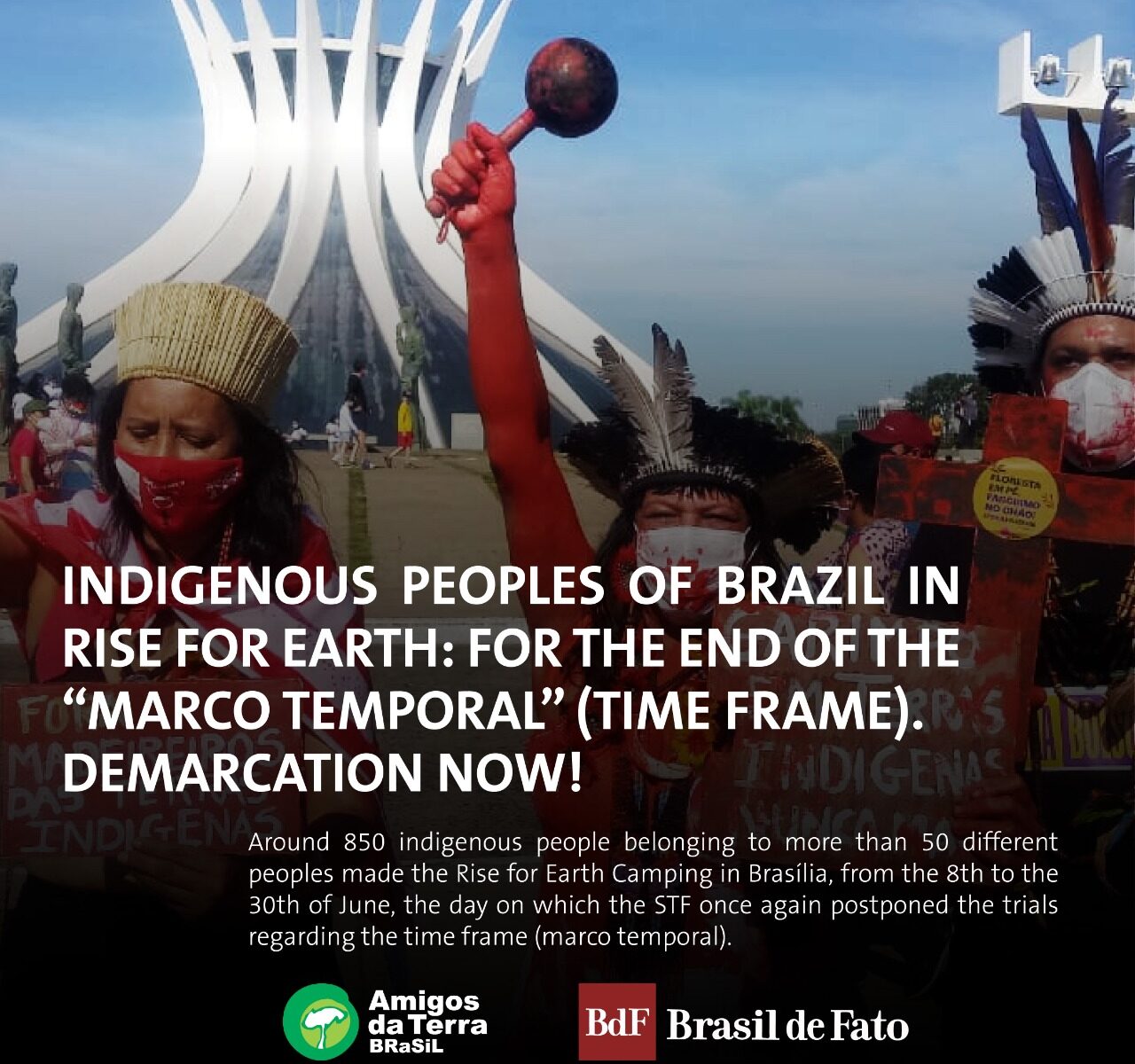 Indigenous movements protest in front of the Chamber of Representatives against the approval of Law Project 490 in the Committee for Constitution, Justice and Citizenship (CCJ) – Tiago Rodrigues

The Supreme Federal Court (STF) postponed once again the judgment of the Extraordinary Appeal (RE) 1.017.365, a request for reintegration of possession from the Environment Institute of the state of Santa Catarina (IMA) against the National Indigenous Foundation (Funai) and indigenous people from the Xokleng population, from the Indigenous Land Ibirama-Laklanõ, recognised as belonging to that people by the Ministry of Justice in 2003. The judgment was scheduled for the coming August 25th. As the Supreme Court recognised the general repercussion of that case in 2019, the decision in the case will have juridical repercussion to all the indigenous peoples in the country.

IMA’s request is based on the idea of “marco temporal” (time frame) of occupation of indigenous lands, created by the former minister of the Supreme Federal Court (STF), Carlos Ayres Britto during the court’s trial on the demarcation of Indigenous Land Raposa-Serra do Sol (TIRSS), in the state of Roraima (RR) in 2009. In favour of the demarcation of TIRSS, the STF minister considered the 1988 constitution’s promulgation date (October 5th of that year) as “unsubstitutable referential to the recognition for the indigenous people of ‘the rights over the lands that they traditionally occupy’”. 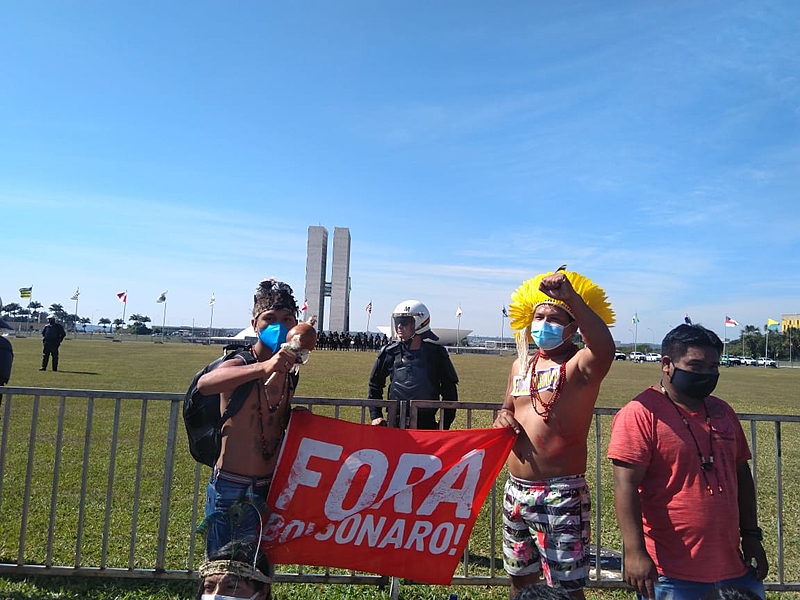 The interpretation created in that trial was manipulated and used in the following years by ruralists and other players interested in advancing over indigenous lands, with the goal not only of restricting future demarcation of indigenous lands, but also of nullifying the ongoing demarcation processes, as stated by the now senator from the state of Rio Grande do Sul, Luis Carlos Heinze (PP), presently known for being one of the main defenders of medicines proved inefficient against COVID-19, and a congressman at the time.

In 2017, Heinze, a member of the Ruralist Bench, made those objectives explicit when he said that the bench had settled with the Michel Temer administration the publication of the Normative Deliberation 001/2017 by the Attorney General of the Union (AGU). Heinze is one of the congressmen who does not hide his anti-indigenous character. In 2014, he said that the indigenous people, quilombolas and LGBT people are “all scum”, and even confirmed what he had said when questioned by the press.

The deliberation 001/2017, dubbed Anti-demarcation Deliberation, was one of the many attempts to expand the interpretation as a general criterium for demarcation of indigenous lands. The first attempt was also created at AGU, with the Normative 303 from July 16th, 2012. The former minister of STF, Carlos Ayres Britto himself, is against the interpretation that the ruralists made of that decision.

In 2018, he reminded the ISA (Socio-environmental Institute) that when he voted, he made an exception to “those situations in which the indigenous people at the time of [the promulgation of] the Constitution were not in their lands [because] they were being chased, victims of physical violence. They did remain in the surrounding areas, around their lands. And they did not recover their lands because they found an environment of hostility, of aggression”, said the Supreme Court’s former minister.

In May last year, the STF minister Edson Fachin suspended the Anti-demarcation Deliberation. On the coming August 25th, a Court session will define whether they confirm Fachin’s decision or not.

Indigenous People in the fight

Around 850 indigenous people belonging to more than 50 different peoples made the Rise for Earth Camping in Brasília, from the 8th to the 30th of June, the day on which the STF once again postponed the trials regarding the time frame (marco temporal). The indigenous movement, which mobilised 1200 indigenous people in Brasília on the week of June 30th, and in hundreds of protests around the country, decided that the delegations from various states will return in August, when the STF resumes the trial.
Besides the issues at the Supreme Court, the mobilisation was also against the Law Project (PL) 490/2007. According to a technical note of the Missionary Indigenist Council (Cimi), the Project intends to “make the demarcation of indigenous lands unviable”, as well as to open the demarcated lands to “diverse economic enterprises like agribusiness, mining and the construction of hydroelectric power plants, among other measures”.

The PL was approved by the commission of Constitution and Justice (CCJ) of the Chamber of Representatives last June 23rd in a session which was much questioned by the opposition and by the indigenous movements, which besides having their participation censored, were also strongly repressed by the military police of the Federal District during the protests in front of the Chamber. As in other occasions, the president of CCJ, bolsonarist congresswoman Bia Kicis (PSL-DF) was accused of censoring the debate, even interrupting the speech of the only Brazilian indigenous congresswoman, Joênia Wapichana (Rede-RR). Even if approved by the Chamber of Representatives, the Project will not be valid if the STF decides for the unconstitutionality of applying the idea of time frame defended by the ruralists.

The mobilization in Brasília is also against the PL 191/2020, with authorship of the Bolsonaro administration, which tries to legalise mining and other mega projects in Indigenous Lands, and the PL 2633/2020, criticised for legalising situations of illegal land appropriation.

The false argumentation of the Bolsonaro administration and its neoliberal base

Both the congressmen who approved the PL 490 in the CCJ and the president Jair Bolsonaro have been using the strategy of speaking in the name of the indigenous peoples when they defend those anti-indigenous projects. Blosonaro has even started to incentivise indigenous leaders to defend mining and agribusiness in their lands, as part of that strategy.

The Apib (Articulation of Indigenous Peoples from Brazil) and the Mining Observatory have shown the content of a meeting between Bolsonaro and a wood extracting businessman, the president of Funai and Kayapó indigenous leaders from the state of Pará, in which that strategy becomes evident. “The indigenous people who want to work with mining must press their politicians”, said the president of the Republic in the meeting outside the presidential schedule.

The argument of supposed defense of the indigenous peoples is evidently false. It is public and well known that agribusiness and mining are interested in advancing over indigenous territories, which is where one can find areas with proved more preservation of socio-biodiversity of the Brazilian biomes. As revealed by magazine Piauí recently, requests for mining in indigenous land, which this year have already reached a record high, were all made by non-indigenous. 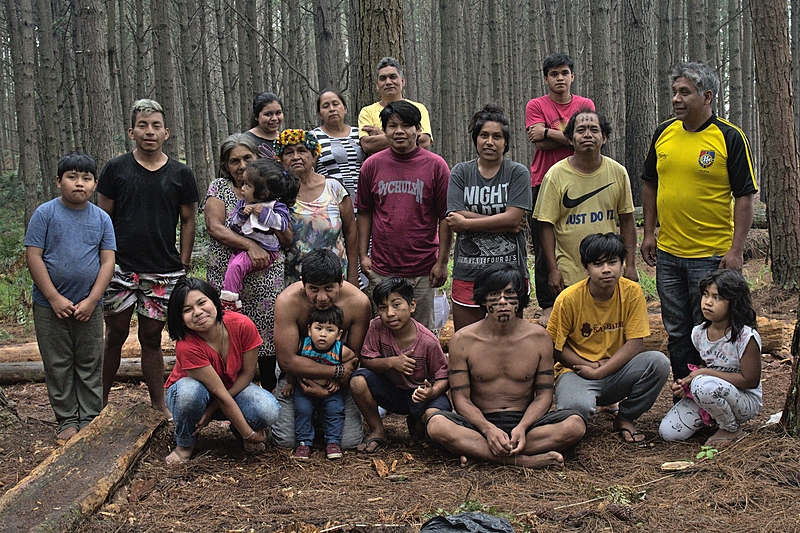 We need to continue supporting the fight of the indigenous people against those historic regressions, and make the STF eliminate once and for all the juridical aberration which the “marco temporal” is, as well as all the “cattle passing” which has been promoted against the rights of the traditional and original peoples, and against nature’s common goods.

Friends of the Earth International, the biggest base Federation for environmental justice in the world, with groups in 73 countries, celebrating this month of June 50 years of existence, approved unanimously on the last day of its general assembly (July 2nd) a resolution committing to act in internationalist solidarity supporting the indigenous mobilisations articulated in Brazil, as well as the Rise for Earth camping and the March of Indigenous Women.

Demarcation now!
No to the “marco temporal”!