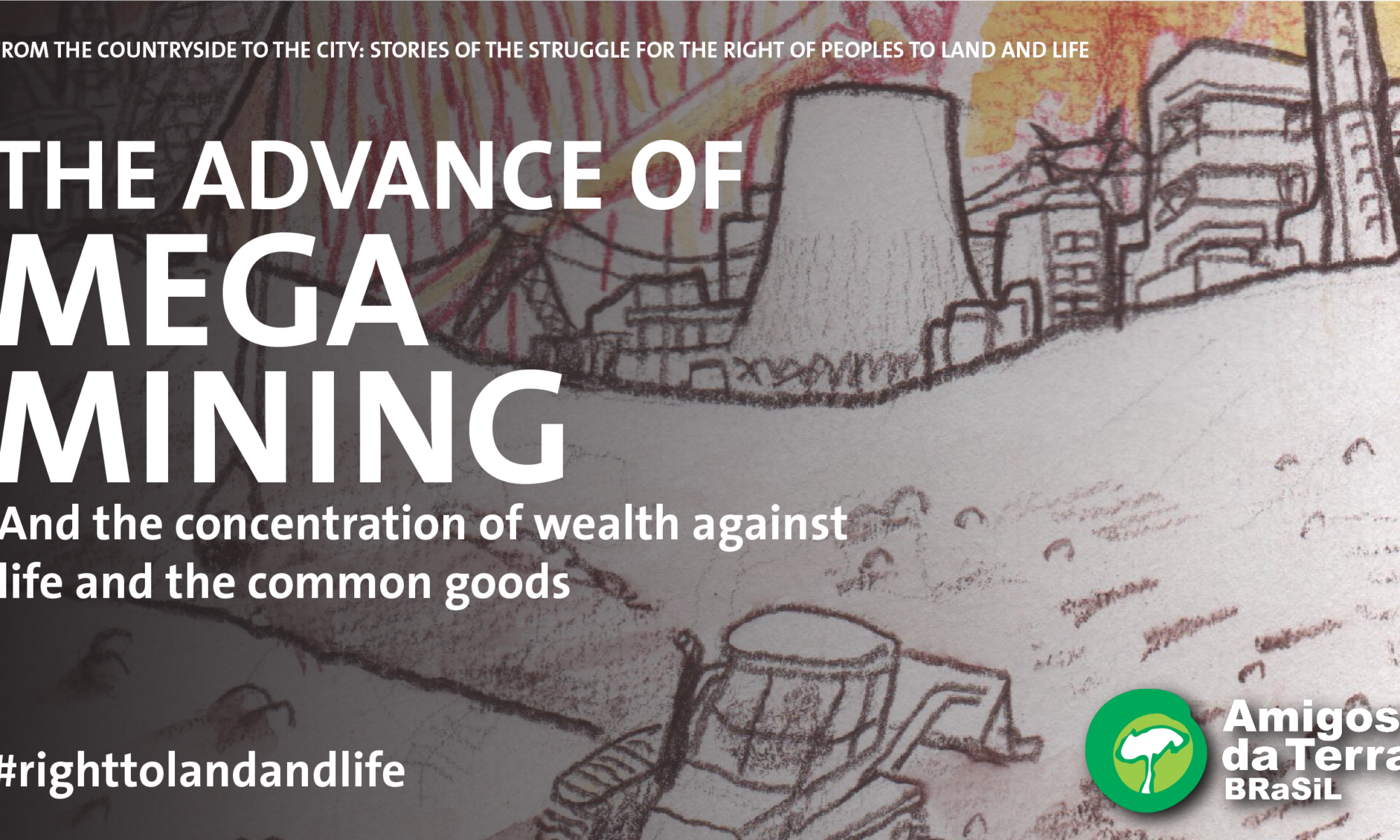 The publication of “From the countryside to the city: stories of struggle for the right of people to land and life” explains how Rio Grande do Sul is becoming the new mining territory in the country. There are dozens of projects which, if approved, would make the state the third in Brazil with the highest mining activity.

While mega projects with potential impacts in the community and the common goods advance, dozens of organizations and popular movements prepare themselves to fight against the implementation of extractive projects.

For Charles Trocate, member of the national coordination of MAM (Movement for Popular Sovereignty in Mining), the rising number of requests for research, registrations and investments in mining can be explained in general by three phenomena of mining in the world nowadays: “the first one is that the capitalists have been making a lot of money with reinsurance [the insurance of the insurance companies] of the investments; secondly in the classical mode, the capitalists only obtained surplus value from their investment when the ore had become a product, and that product had been sold. With the financialization of the economy, the ores taken from the land generate surplus value to the capitalists when they are taken from the land and during the transportation, i.e., some ores will never become a product, instead staying stored somewhere in the globe also generating surplus value”, explains Trocate.

The third element, according to the member of the coordination of MAM, refers to the intermediate agents: “The pricefication of nature in the case of mineral commodities has its intermediate agents, those who make loans to the big mining companies, the ones who help to determine the value of the commodity, like the big banks which are part of that global mineral production chain”.

Besides the pressures of the market for expansion of mega mining companies in Brazil, there is the fact that a commercial agreement between the European Union and Mercosur, which has not been ratified yet, contains a prediction of tax reduction to increase the exportations of ore to the European continent even more.

The big mining projects which have been fought against by the local population follow one of the basic elements of the script adopted by the extracting mega entrepreneurs in the global South: no participation, no dialogue, much less any consultation to the damaged population.

In the city of Caçapava do Sul, Nexa (from the Votorantim group) intends to extract heavy metals like led, zinc and copper from the riverside of Camaquã River. If implemented, the mine from Nexa will consume 150 cubic meters of water from the Camaquã river each working hour. Presently, thanks to the resistance of the local inhabitants, the project has not obtained a license, but the threat continues since the company has various lawsuits filed at ANM (National Mining Agency). According to ANM, only in the state of Rio Grande do Sul the mining company has around 280 ongoing suits, many of which in the phase of authorisation of research.

In the city of Lavras do Sul, the project Três Estradas (Three Roads) from the company Aguia Fertilizer S.A. intends to mine a phosphate field in an area close to the city of Dom Pedrito. The ore is of interest to giants of agribusiness like Bunge, which has already had some mines and phosphate fields vetoed by the Federal Justice as in the case of Anitápolis in Santa Catarina. The region of the Three Roads is one of the best preserved in the Pampa biome. Family ranching is the main income source of the small properties which have been occupying the place for hundreds of years. With controversial projects – the company has sent different versions to be licenced, Aguia aims to install a tailings dam which will be twice as big as the company Vale’s dam in Brumadinho in the state of Minas Gerais (which burst in 2019, killing more than 270 people buried, besides destroying part of the city and the environment).

In case of bursting, the tailings could get to Uruguay, creating an international imbroglio, passing through the city of Rosario do Sul and the famous beach of Areias Brancas. Yet, the studies of the company did not foretell the impacts of a possible leakage in the dam. CEDH-RS (State Council of Human rights from Rio Grande do Sul) recommended FEPAM (State Foundation of Protection to the Environment, a technical organ of the government of the state of Rio Grande do Sul) should nullify the previous licence conceded to the project, taking into consideration the recommendation of the Committee of Traditional Peoples and Communities from the Pampa, which documented irreparable damages to the territories and the traditional community of family ranchers in the region. An anthropological technical repot requested by MPF (Federal Public Ministry) recognizes that family ranchers who live in the area of influence configurate a traditional community with a unique lifestyle.

The Retiro Project of extraction of titanium from Rio Grande Mining Company S.A., a remake of similar projects like Bujuru, presented in 2000 in the city of São José do Norte, had suffered a loss imposed by the mobilization of ranchers and fishermen from the region, who managed to alter the City Statute to prohibit big mining projects in the area. However, it does not have retroactive effect, therefore the Initial Licence issued by Ibama (Brazilian Environment Institute, associated with the federal government) in 2017 is still valid, and the company can request an implementation licence at any moment. The Initial Licence expires this month of June.

The project Mina Guaíba from the company Copelmi, which intends to implement the biggest open-air coal mine in Brazil, and one of the biggest in Latin America, between the cities of Eldorado do Sul and Charqueadas, 16 km from the centre of the capital Porto Alegre, has not advanced in the last period, also thanks to the mobilisation of CCM-RS (Committee for Combating Mega Mining Companies in the State of Rio Grande do Sul). The study developed by a panel of specialists of CCM-RS and sent to FEPAM, which is responsible for the licence, made the organ request more than 100 pieces of information to the company. There are also many lawsuits trying to stop the project from advancing. One of them demands that there is a free, previous and informed consultation to two Mbya Guarani tribes which would suffer the impacts of the project.

The indigenous peoples, as well as the quilombolas and traditional communities of the Pampa, have (guaranteed by the Convention 169 from the ILO [International Labour Organisation], ratified by Brazil and internalised in the national juridical order) the right to self-determination, to making their own protocols of consultation and to the consent or not to the implementation of enterprises which affect their territories. In the month of April, local anti-indigenist congressman Alceu Moreira (MDB) presented the Project of Legislative Decree (PDL 177/2021) which “allows the president of the republic to denounce Convention 169”. The network of State Councils of Human Rights and hundreds of organisations and social movements from Brazil are articulating to repel the proposal.

CCM-RS has also been denouncing another project of Copelmi which is in process of obtaining environmental licence at Ibama: the project of the thermal power station – UTE Nova Seival, among the cities of Candiota and Hulha Negra. The project is developed in negotiation with the companies Eneva and Zhejiang Energy Group, and it would have 726 MW of power installed, using as fuel the coal from Seival mine, presently the biggest open-air coal mine in the country, and also controlled by Copelmi.

Get to know more about those cases in the publication “From the countryside to the city: stories of struggle for the right of people to land and life“. See the work here.

Read the update chapter by chapter:

Popular solidarity against the ethical makeup of companies