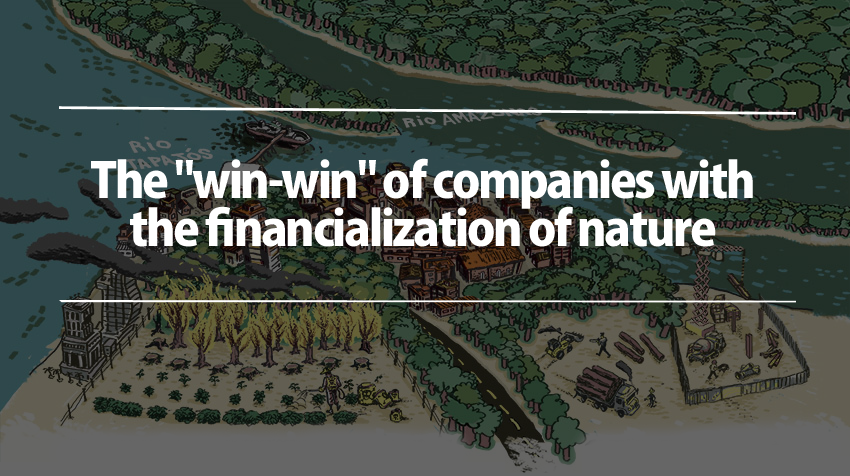 Acre was the first Brazilian state to implement policies regarding nature financialization. What does that mean? It means that the state was a kind of laboratory for measures that transform nature – trees, rivers and land, all of which we cannot (or could not) value – in something quantifiable, transformed into a product and, in addition, in assets on stock markets that will serve as currency of exchange and valuation of some company afterwards. Hence, a sea of problems:

This is part 3 of the introduction to the story “What really happens in the Amazon Forest”. Browse content:

Part 1 (central page): What really happens in the Amazon Forest
Part 2: Who is favored by Bolsonaro’s responses to the fires?
Part 3: [you are here] The “win-win” of companies with the financialization of nature
Part 4: But after all, who is behind these crimes?

And also see: The siege explained on a map

First, land privatization: companies need to have areas for “carbon capture”; that is, green areas to “compensate” for the pollution they generate in the world. Thus, large polluting industries, such as oil, mining and aviation companies could continue their activities normally, with the same or even higher levels of pollution, as long as they have, in some part of the world, their “farm of carbon capture”.

There is another problem: the “compensation” itself is a violation of rights. In order to continue polluting, companies take ownership of a territory that is not theirs, in deals that either do not involve communities or are based on lies – with promises of financial compensation never materialized. Native peoples, traditional communities and rural workers, who historically make a living in the forest – with balance – see themselves forbidden to manage the forest in their own cutural way. Their territory is stolen and their lives are therefore put at risk: families end up being pushed to the outskirts of cities, becoming part of the poor population. Wealth is left behind, in the land that no longer belongs to them. We can’t help from asking: and who compensates for that “compensation”?

The situation gets complex: in order to “compensate” for the pollution they emit, companies violate rights and prohibit traditional ways of life, especially in the Global South, and also profit from this by transforming these territories into financial assets; in short, the more rights they violate, the more they can pollute and expand their gains: it is profit to pollute and to destroy and profit to “compensate” it later.

See below in more details the “win-win” of the companies behind the burning of the Amazon, in material produced by Amigos da Terra Brasil along with CIMI (Indigenous Missionary Council, in English) in Acre:

– How agribusiness and the financial market profit from the devastation of the world’s largest rainforest
– How much are the preservation and false solutions of “green” capitalism worth, and who compensates for the compensation?

Dercy Telles, rubber worker and union leader, and Lindomar Padilha (CIMI-Acre) talk about monocultures and FAO’s intention to consider this as a forest or a way to offset pollution. With English subtitles.

Also read part 2 of the introduction:
Who is favored by Bolsonaro’s responses to the fires?

Or skip to the final part of the introduction:
After all, who is behind these crimes?