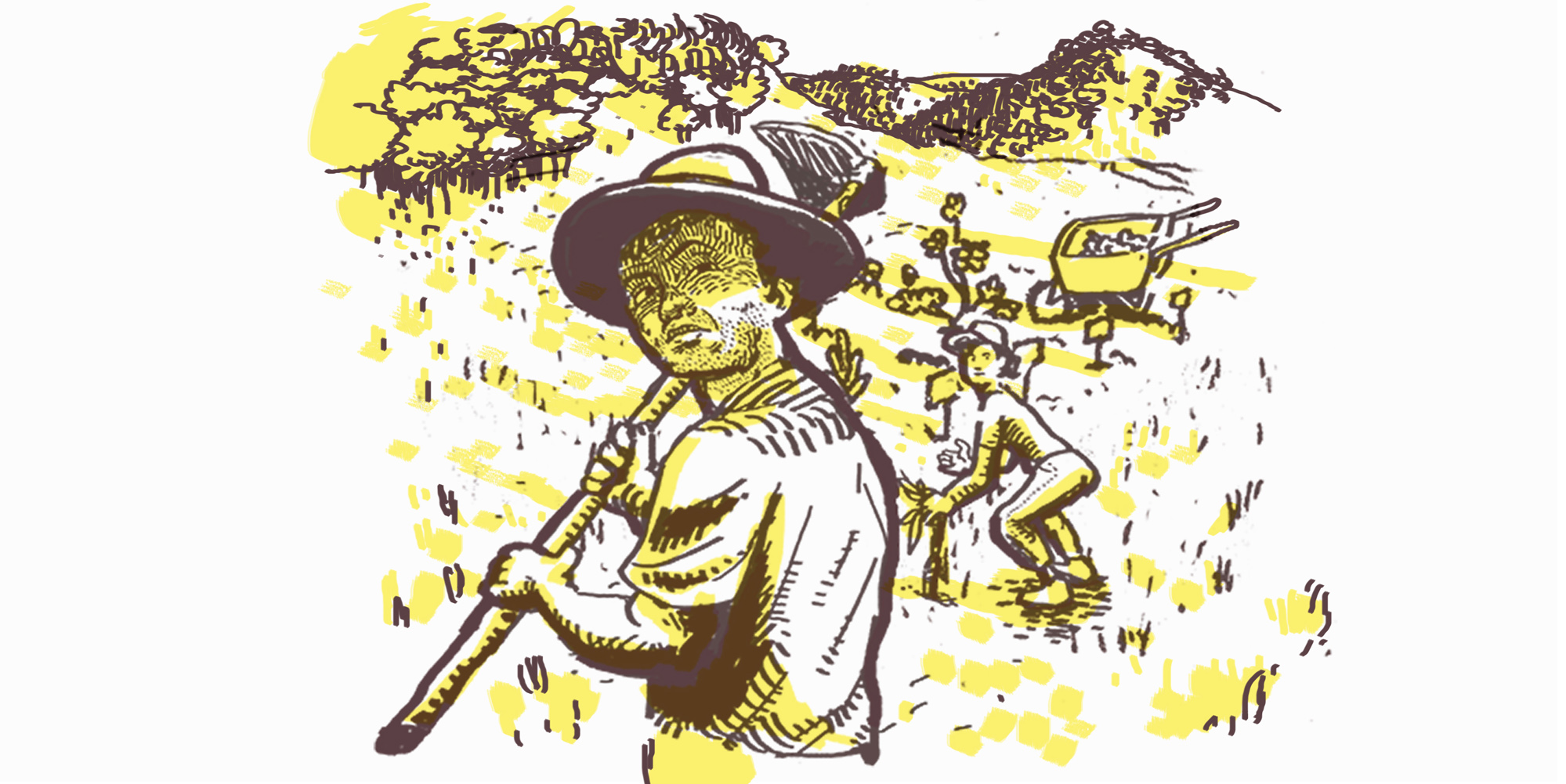 Vruuuum vruuum vruuuuuum and the noise woke José Marques da Costa, a rural worker from Alenquer, a small municipality in the state of Pará with just over 50 thousand inhabitants. Of the 53 years that José carries on his shoulders, most of it was filled with restless nights: there’s no easy sleep in the corners of Brazil for those who dare to defend the rights of small farmers and rural workers – exactly what José does, and when he heard the fourth vruuum he stood up, alert.

A few months earlier, new messages had reached him (always indirectly, cowardly warning, “send word”) – We will kill about five of you people, they will not even know and – Justice is slow, in the bullet we can solve it faster. If before José slept with one eye open he started to open them both on nights of little or no rest. And if television seemed like a good medicine to make him sleep what actually happened was the opposite: the dragging voice of the current president of the Brazilian Republic, Jair Bolsonaro, echoed from the device and only aggravated José’s insomnia by saying things like – Who should have been arrested were the MST people (Landless Workers Movement), those vagabonds. The policemen reacted so as not to die, and – Let’s shoot who is from the Labour Party in the state of Acre, huh! Hate speech that encourages and materializes violence against rural workers in the Amazon Region and in Brazil: against him, José. The first Bolsonaro’s sentence refers to the Carajás Massacre, when the police in Pará murdered 19 landless workers in cold blood; the second was said during the 2018 presidential campaign.

Vruuuum vruum followed the noise, and José Marques risked a glance out on the street.

Motorcycles. Many motorcycles – One, two, three, half a dozen, nine, ten, he was counting, but the task was hampered by the constant circular movement of the vehicles, accelerating and decelerating in front of the house. Twenty, it must have been something near that, and soon José started to focus not on the bikes but on who rode them: that was certainly a matter of greater importance. That was when he saw neighbors, friends, colleagues, and the fear that had settled in his chest gave way to a little curiosity – What are you all doing here at this hour? and then commotion took place: the circus set up there was not an ambush. On the contrary, it was an escort to protect him exactly from attack and possible murder.

Since the end of the day the rumor had run through the small town that gunmen – All very treacherous, they’ll drink a coffee at your house before killing you, these treacherous gunmen were lurking on the road, ready to attack José Marques when he left home. Death ordered by the big farmers in the region. The twenty or so motorcycles would serve – and did serve – as a shield to take José Marques to a safe place. That was how he got on his motorcycle, in the middle of the night of little Alenquer, took off and lived to fight another day among and for his people.

Land grabbing: overlapped CAR and “Four Years of Storm”
What led gunmen to pursue José Marques is related to the long-named position he carries: president of the Community Association of Residents and Small Farmers of the Limão Grande Community, located in Alenquer. There, 86 families lived and worked in an area of around ten thousand hectares – until, in 2016, what José called “Four Years of Storm” began.

First, there was the requisition – by farmers – of three thousand hectares of the area where the families lived. In consultation with Incra (National Institute of Colonization and Agrarian Reform, in English), with the support of the Union of Rural Workers and Family Farmers of Alenquer (STTR-ALQ), it was shown that the request was fair: the families accepted to leave that area, redistributing themselves in the seven thousand remaining hectares. In the meantime, the land was georeferenced, a necessary step for the community to register in CAR (Rural Environmental Registry, in English).

Work done, they returned to Incra and then came the surprise: fifteen days earlier, several people had registered those areas as their own. Suddenly, the land where families have lived since 2007 had “owners” – and they were others. There was never any inspection by Incra to verify if those who registered in CAR actually occupied the self-declared land; if there were one, it would be simple to see who actually occupied the area – They didn’t even know where it is, however José does and this seems to be of no use.

The registration, based on the information provided by the applicant, has no deadline for verification by the competent public agency: some states claim that the analysis of the registrations would take from 25 to 100 years. However, contrary to the popular imaginary of slowness in justice, long before the due inspection could take place, the repossession of the site was decreed – which happened with a strong police apparatus. In short: 86 families were thrown out on the street. Everything they had was left behind – clothes, crops, houses – and what was left behind was set on fire and tored down. 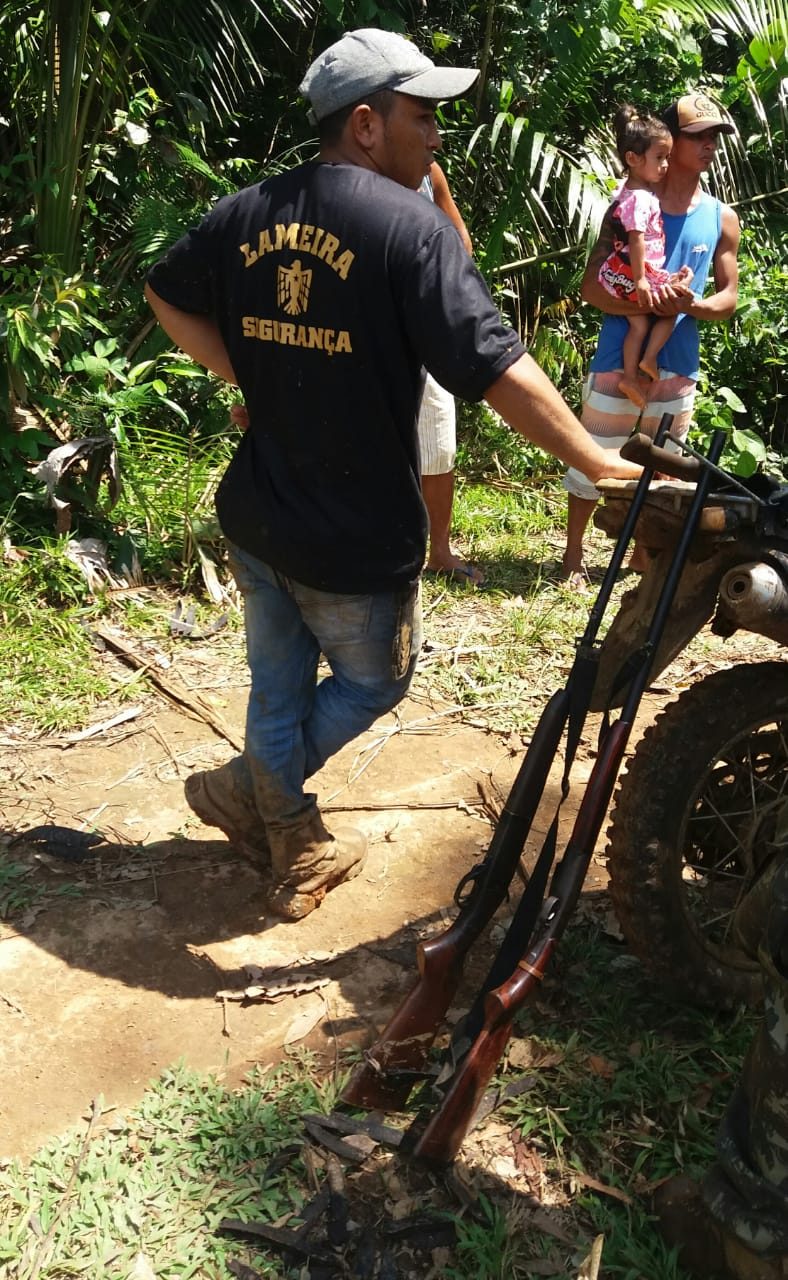 The videos above were recorded by local families. The first one shows the fire consuming a building next to a plantation; the second shows the remaining ruins; the last video denounces the destruction of the only access bridge to the area, a service performed by the henchmen of the land grabbers. In the photo, also made available by residents of Limão Grande, heavily armed private security guards prohibit the movement of rural workers in the disputed territory.

Nowadays private security guards roam the territory. Rifles speak loudly and anyone who ventures to look for something that may have left behind (and sometimes despair is prone to adventures) is at serious risk of being attacked by the land grabbers’ henchmen. Well that’s the true name of what happened: land grabbing – using the overlapping of land in self-declared CAR. Different CPFs (individual registration, in English) called themselves owners of an area that they do not occupy, in anticipation of the real occupants who were preparing the procedures to register in the system. Without any inspection, the Justice determined the repossession of property in the name of the interests of the land grabbers.

One detail draws attention and highlights the intention of taking over the territory of rural workers: when carrying out the CAR on several different CPFs, an area of almost 600 hectares was not overlapped – it would therefore be the right of families to remain there. However, the entire area was evicted, with nothing and no one left behind – There was no respect for eviction protocols, complains José, but in a place where the land is owned by those who neither live nor works at it, very little is expected of a Justice and a police at service of big farmers.

Agrarian inequality and violence in the countryside
The numbers of agrarian inequality in Brazil are alarming: almost half of the country’s rural area belongs to only 1% of landowners. Data from the 2017 Agricultural Census show that large rural establishments raised the concentration of land to 47.5%, while small farmers, whose properties have up to 10 hectares of land and represent half of the country’s farms, occupied only 2, 2% of the productive territory. 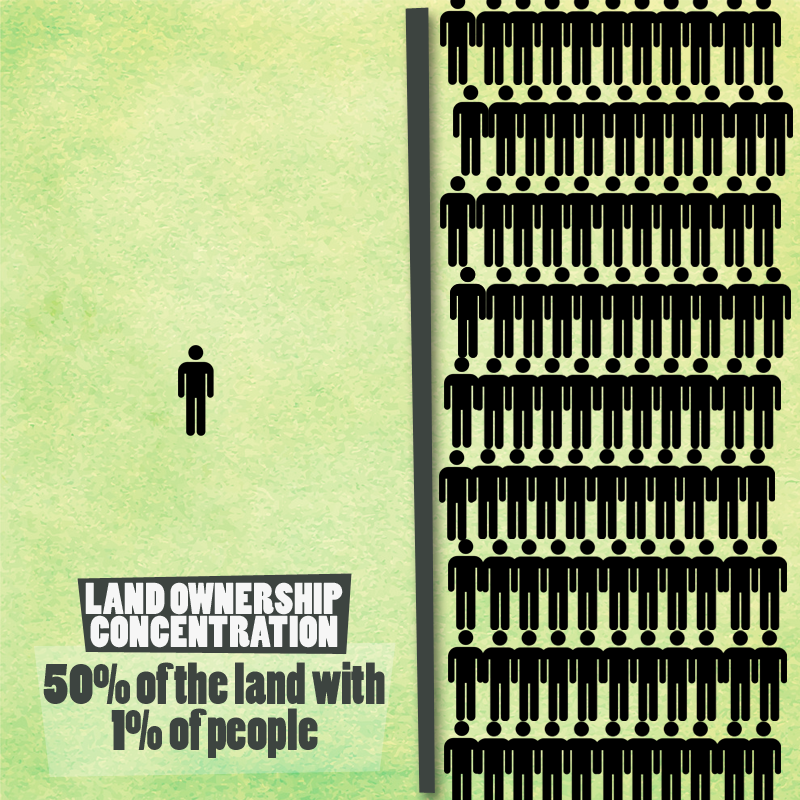 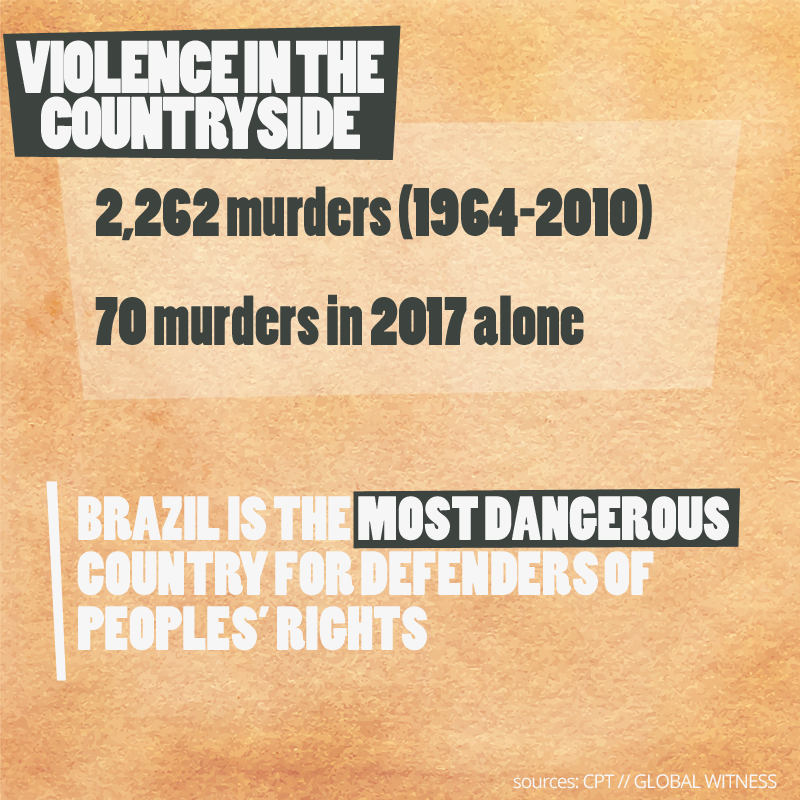 Such inequality in land distribution – in addition to emphasizing the urgency of a Land Reform – generates violence: land conflicts killed 2,262 people between 1964 and 2010 in Brazil. In 2017 alone, there were 70 murders, according to data from the Pastoral Land Commission (CPT). And try to guess who dies in these conflicts? Always the little ones: Brazil is at the top of the list of countries where the most defenders of the rights of peoples are killed.

And it is exactly these small farmers, persecuted for defending their territories, that produce more than 70% of the food that reaches the Brazilians family tables, since large monocultures export most of their production. However, Bolsonaro’s government chooses to privilege the interests of ruralists, intensifying attacks on native peoples and trying to legalize land grabbing with PL 2633 (Law Project, in English), the notorious PL of Land Grabbing.

(All of this information is contained in Resolution No. 10 of the National Human Rights Council, of October 17, 2018 – in Portuguese)

Also read parts 2, 3 and 4 of the introduction:
– Who is favored by Bolsonaro’s responses to fires?
– The “win-win” of companies with the financialization of nature
– But after all, who is behind these crimes?

And the stories:
– The siege explained on a map
– A port stuck in the “mouth” of the river
– Before the port arrives (if it does), the impacts are already here
– Health clinic and quilombola school: the struggle changes life
– Curuaúna: on one side, soy. On the other? Soy also
– A face printed on a T-shirt
– [you’re here] The motorcycle night
– If well organized, everyone fights