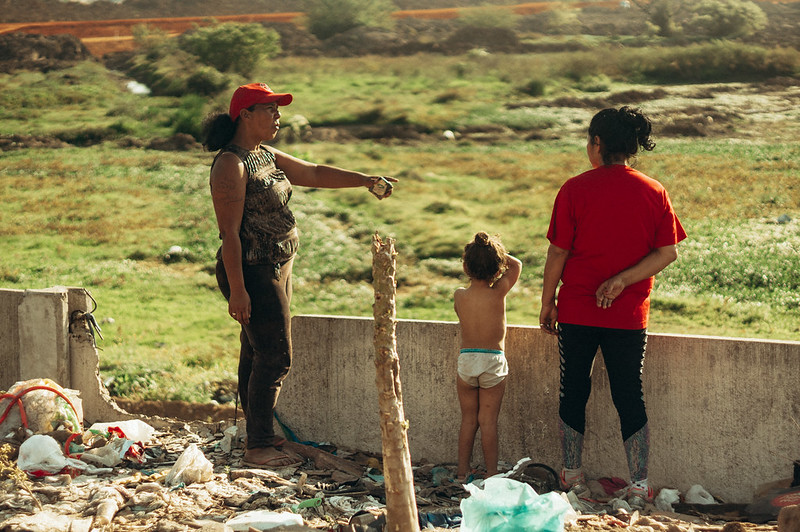 On the television, or from a neighbor who heard about it on the radio. This is how the families of Vila Nazaré, a community in the north area of Porto Alegre, southern Brazil, found out that they would lose their homes and be sent to other corners of the city, farther away and far from where they have established their roots. All because Fraport, a German corporation that operates dozens of airports around the world, wants to expand the runway at Salgado Filho International Airport, whose operation has been ceded to the company since 2018. The contract is valid for 25 years. In the meantime, between airplanes and people, the priority seems clear: airplanes.

Vila Nazaré is home to around 2,100 families. They are workers who have been neglected by the government and who, without financial conditions to pay rents elsewhere, occupied idle areas of the city and made their home there. They came mostly from cities in the interior of the state of Rio Grande do Sul, leaving the countryside due to lack of opportunities and pursuing the dream of a better life in the capital. For more than five decades they have built houses, developed local commerce and consolidated family, friendship and neighborhood ties.

The airport runway extension plans, however, are intended to sweep the community from the map. And the worst: the removal of residents has been planned in an arbitrary and authoritarian way, without guarantees of rights to affected families. There is no removal plan and families are being divided: part of the people is going to Nosso Senhor do Bom Fim Allotment and part to the Irmãos Marista Allotment in Timbaúva, far from basic health, education and transportation services. Children who go to school near Nazaré will lose the school year; those who work near the village may lose their jobs, as most are informal jobs in which employers are not required to pay for the transportation of the worker; who goes to the doctor at the health clinic next to Nazaré may lose health care services.

The lack of information and transparency in the process is worrying: at no time have local leaders been heard so that the thoughts of those who will be directly affected by the works is well known. At a public hearing convened by the then state deputy Pedro Ruas (PSOL), the only time when all parties involved in the process were meeting with the community, representatives of Fraport, despite being present, refused to sit at the table and answer any questions from residents – who have positioned themselves quite clearly: they do not want to go to Timbaúva, the furthest place from Nazaré, on the border between the municipalities of Porto Alegre and Alvorada.

What most want is their right to stay in the region where they built their homes and lives. There is basically no clear and available information for families who see their right to housing threatened to know what is going on, or where they are going to, or where their family members, friends and neighbors are going to: if to Nosso Senhor do Bom Fim or to Timbaúva, and when, why, how? One of Fraport’s responsibilities was to help move families: of the few that have already been removed (all to Nosso Senhor do Bom Fim Allotment), trucks took only part of their belongings, and dropped them in front of the buildings without any assistance; the money that would be paid for the purchase of new furniture was paid only a part.

Fraport’s responsibility, however, is much broader: the Federal and State Prosecutor’s Offices and the Federal and State Public Defenders have brought the company to court, recognizing the company’s full responsibility for relocating families, including the construction of a third alterntive for those who are not satisfied with the two options given so far – which, considering that 85% of families would be evicted to Timbaúva, represents most people of Nazaré. The case is in court and, in its first statement, the judge recognized the right of families to the third option. However, she said this should be dealt with later, individually with those left behind in the rubble. The judge did not even demand from Porto Alegre and Fraport a removal plan, which clearly shows who leaves and where and when and how. With the limits of the local judicial system, it seems clear to us the importance of an international treaty that regulates the operations of transnational corporations, such as the Binding Treaty that will be built within the UN. Often richer and more powerful than the states themselves, North Global companies violate the rights of the southern peoples and attack their territories.

Local government and Fraport pretend nothing of what’s happening is their problem, not listening to Vila Nazaré’s urbanization proposals, what could improve the quality of life in the region and ensure that families stay in their territory. For years the city of Porto Alegre abandoned Vila Nazaré, making life impossible there in order to create a “desire of leaving” in the families: the health clinic was closed, the children’s school as well; the muddy streets are potholed and at first rain the houses flood with sewage.

On its website, Fraport guarantees to respect the cultural, ethical, social, political and legal diversity of all nations and communities. What you see is the opposite: there is no dialogue or transparency, while threats of removal, authoritarianism and disinformation remain. With each family removed from Vila Nazaré, tractors soon come to tear down the houses; only rubble stays behind, in a sad scenario of war. All in the name of airplanes and on behalf of the profits of a German transnational corporation.